The beautiful and historic church is centrally located within Shipley and is very near The Andrew Hall which is convenient for church functions.   The address and postcode for sat nav information is Red Lane, Shipley, West Sussex, RH13 8PH.  Parking is available along Red Lane.

The Church's Website with details of Service Times and Facilities can be found at https://www.achurchnearyou.com/church/5135/

Ensuring the safety of the vulnerable in our community is very important to us and we fully endorse the Safeguarding Policy of the Church of England.

Our Safeguarding Officer is Andy Guy and he can be reached at:

The church is one of the oldest Norman churches in Sussex and dates from the 12th Century, contemporary with Chichester Cathedral, and was built by the Knights Templar on the site of a smaller Saxon church, probably of wattle and daub construction.    The West door has particularly fine carved stonework, the nave and chancel are separated by a massive tower with walls almost three metres thick.  The two tall chancel arches are of different design and both beautifully carved in typical Norman fashion, one ending in corbels shaped like grotesque heads.  The south wall has double-splayed windows, rare in a church of this date, hinting at Saxon design.  The wooden porch protecting the south door is 14th century and contains a medieval bollard said to have been used to moor up boats at the nearby river dock that served the village.  Some of the walls contain pale Caen stone from Normandy which must have been transported by boat across the Channel and then up the River Adur to Shipley.  The river is still tidal even this far inland.

The church underwent considerable renovation work during 1893 when the north aisle and vestry were added, and earlier work in 1830 included the removal of the medieval spire which had become unsafe.  Apart from these works, the structure of the building and openings on the south side remains as built by the Norman craftsmen.

The large churchyard has for many years housed a small flock of sheep, much as it would have done nine hundred years ago.  These keep the grass down between the gravestones.  John Ireland the composer was buried here in 1962, his grave marked by two prehistoric sarsen stones.  His greatest pleasure was to sit in the south porch enjoying the view over the water meadows.

The stained glass windows include six by C E Kempe, Master of Glass (1837-1907) and all are particularly beautiful. Their renovation was completed in 2009, and the six bells high in the tower were sent to the Whitechapel Bell Foundry for refurbishment and rehung in 2010.  But, not surprisingly for a Grade One Listed Building, further repairs have become necessary after time and weather have played their part.  This year the main conservation project will be the re-pointing of the West front elevation with lime mortar – this means patiently chipping away the old pointing and afterwards applying the lime based mortar to restore the wall to its original Norman appearance.  The work is planned to start this April for about six weeks and serious fundraising is underway.  Gifts and grants make these projects possible, as parish churches do not receive any state funding for restoration work but have to raise the money entirely themselves. 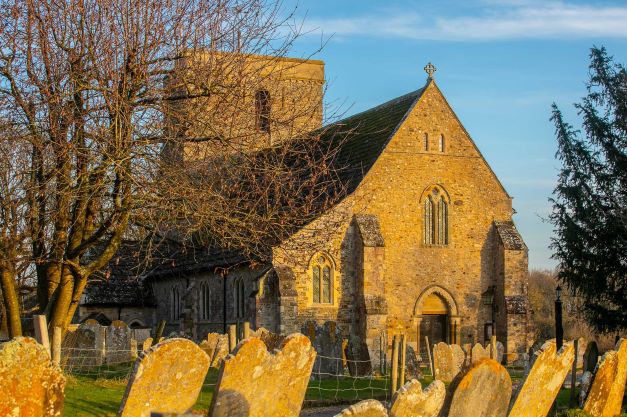