It was wonderful to see so many people come to the ribbon-cutting ceremony on  2nd June. Cllr. Baxter opened proceedings and welcomed everyone, followed by Cllr. Cuthbertson who spoke about how and why the Jubilee Commemorative Bench and plaque came about, echoing themes from Shipley Parish Council and the Parochial Church Council for Her Majesty’s coronation in 1953. Bob Phillips – Freeman of Shipley Parish – cut the purple sash and Rev. Chris Allen blessed HM Queen Elizabeth ll.

The Church committee then provided refreshments for those who had come which raised money for the ongoing church roof repair appeal.

On Sunday 12th June, as a belated Jubilee celebration, around 20  families came to Coolham Playing fields to a ‘Teddy Bears’ Picnic’ to acknowledge the picnic table donated to the community by D Howick Tree Surgery for the Jubilee, sat on a base by Steve Derby and Luke Webber who donated their time. A second plaque (the same as the one installed for the bench ribbon ceremony the previous week)  was installed by Cllr. Woodage, by the Wild Cherry Tree planted for HM’s ‘Jubilee Green Canopy’ scheme; and a guest appearance was made by ‘Mr. Bear’ and his companion who came along and met children, followed by a half hour story session. Liz Rogers from neighboring village  Partridge Green brought her ‘community face-paints’ –  a new free scheme which she has set up – and offered free face painting to the children. A very welcome T&M Ices served the most wonderful ice-creams on what was then the hottest day of the year.

So, with our new bench in Church Close,  our Cherry tree putting Shipley on the ‘Queens Green Canopy’ map, the picnic bench and a few Jubilee gatherings in and around the community, the village day and Shipley CE Primary School‘s ‘Soapbox Derby’ I think it’s safe to say that we did ‘Ma’am’ proud. 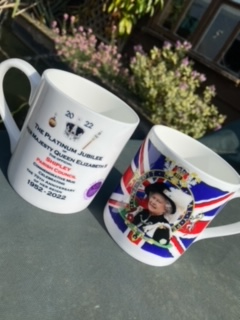